Anyone watching the news this past week would have found the congressional grilling of the current Attorney General Eric Holder at center stage. Somehow with the congressional approval rating at an unprecedented low these republican clowns can still find time to divert the countries attention from the fact that they have stonewalled every Obama initiative at every turn. So instead our tax money is now paying to watch these boobs grill the attorney general about a program that had little effect on the country other than to possibly help out the NRA by bringing more guns into public circulation.

Where is Alberto Gonzales at a time like this? We need a champion of Attorney General Justice from the former glory days of the Bush administration. You know, the guy who willfully fired U.S. Attorneys that Bush had hired in the middle of their terms because they refused to enforce Republican principles and or initiatives. Thankfully Fox News has hired this legal wiz kid as a talking head. Now if he would only get on his soap box and let us know the proper punishment for Eric Holder instead of harping on the pending Supreme Court decision regarding the Obama Health Care initiative. Or having the asinine audacity to proclaim that Obama is violating his oath of office with his new immigration announcement.

Once again lawyers are proving why they make such lousy leaders. Most of them would rather hear themselves talk than make any progress towards a better future for everyone. Their biggest thrills come from out bullying each other. What’s that you say? Obama is a lawyer? Indeed he is and a graduate of Harvard Law School at that. He’s needed now as he is up against a prime example of a bully from the business world. Willard Mitt Romney of Bain Capital. Check out the picture of him and his cronies waving cash around back in the eighties. What a country! 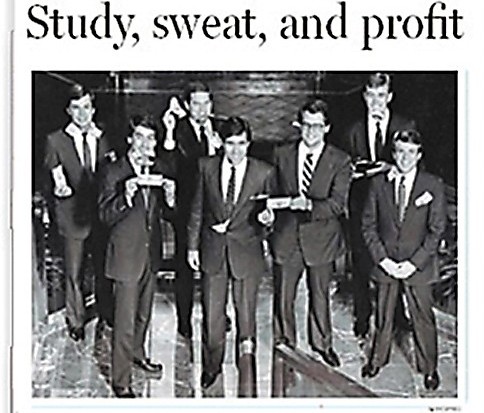 What a gleeful bunch of guys! How cheery to think of them as rich elitists running things! What rascally frat gags can we expect if Romney gets elected?

“A nation that continues year after year to spend more money on military defense than on programs of social uplift is approaching spiritual doom.” — Martin Luther King Jr.

2 thoughts on “Fast and Furiously Ignoring the Obvious”